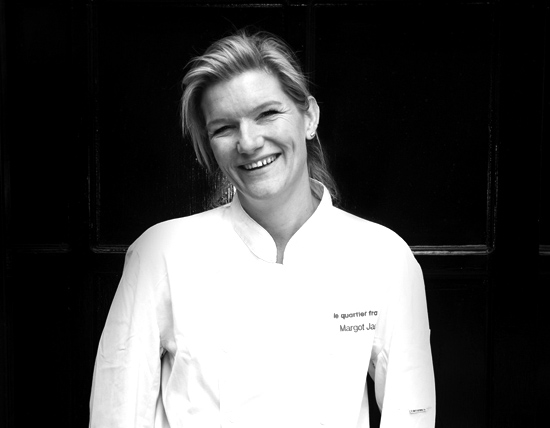 Executive Chef at the award winning, Relais and Châteaux Le Quartier Français Hotel in Franschhoek, Margot Janse believes that each dish she creates has to say something.
Born and educated in The Netherlands, Margot’s tertiary studies included drama and photography – which laid the foundation for her early work with a photographic school in Johannesburg, South Africa.
However at the age of 23 the ‘magic of the kitchen’ beckoned and she approached Ciro Molinaro, a highly respected Johannesburg restaurateur, who agreed to teach her in his own kitchen. It was two years of long shifts and hard work but Margot learned every aspect of managing a kitchen. More importantly Ciro encouraged her to experiment and play with food, creating in Margot an ability to explore beyond traditional ‘food boundaries’.
In 1995 Margot joined the culinary team at Le Quartier Français. The hotel restaurant was already considered one of South Africa’s best, so it was an enormous challenge for Margot when she was asked to take over as Executive Chef shortly after her arrival. However, eighteen years and many national and international awards later, Margot continues to thrive in the career of her choice and enthrall serious diners from around the globe.
Her stimulating African inspired menu changes regularly based on the seasonal fresh produce which she sources from Le Quartier’s own indigenous garden and small local producers. Margot continues to embrace experimentation. She fearlessly works with textures, flavours and balance because she believes that each dish has to say something; each dish is an attempt to tell a story and create a moment of magic.